A notable and exemplary career

I just got back from a farewell luncheon for Stephen Shestakofsky, who is the retiring director of state legislation (i.e. lobbyist) for the Massachusetts Medical Society. Steve symbolizes in his person the very interesting historical fact that for the past 15 years or so the MMS, unlike physicians' organizations elsewhere, has been on the light side of the force. Steve had a lot to do with that, it isn't just because this is the People's Republic of Massachusetts.

Steve was involved in many campaigns for justice and health equity, but one of the most important, because the trickle we started here in Massachusetts turned into a nationwide flood, was tobacco control. It started with the successful referendum campaign to impose a tax on tobacco products, to be used for programs to combat tobacco use. The industry poured in millions of dollars and conscripted convenience store owners and, yes, pharmacies to their fight, but they lost, and the voters passed it. Then the MMS joined with its coalition partners for the workplace smoking bans, strong and enforceable bans on tobacco sales to minors, and other measures that made our state a leader and have now been adopted all over the country.

However, Australia, believe it or not, is ahead of us. This is what all cigarette packages are going to look like in Australia in 2012: 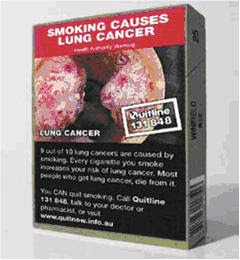 The packages will all be standard, with the strong and graphic health warnings you see here. The merchants of death won't be able to use any of the imagery, colors or lying words they put on packages to seduce children into a deadly addiction. The kangaroo jockeys are also going to raise the sales tax on tobacco by 25% and spend more on anti-tobacco advertising. Naturally, British American Tobacco Australia says they are "surprised and disappointed." Awwww. I'll tell you what guys -- why don't you go to hell.

Posted by Cervantes at 1:14 PM

now THAT is a warning.