I recently went into the deep history of human life expectancy. Now let's look at recent history in the U.S. vs. the rest of the wealthy countries. 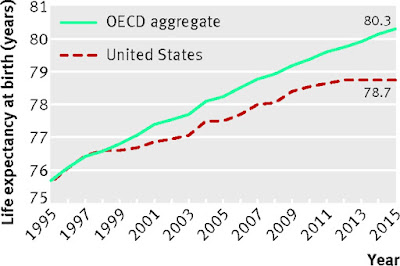 The OECD is the Organization for Economic Cooperation and Development. It actually includes some countries you probably don't think of as wealthy, such as Mexico and Latvia, but also western Europe, Australia and Japan. As you can see, in the mid-90s the U.S. was average among OECD countries. As life expectancy increased throughout the OECD in the early part of this century,the U.S. lagged behind, and then life expectancy in the U.S. stopped increasing entirely.


I snatched this graphic from an editorial in BMJ (formerly British Medical Journal) by Stephen Woolf and Laudan Aron, both Americans.  (No link due to paywall.) They note that this can  in part be explained by the opioid epidemic, suicides and alcohol abuse, which they call "deaths of despair." As have many observers, they link this to economic dislocation, particularly in smaller cities and rural areas, that has affected the fortunes of lower educated white workers. I think this is a bit facile.

I don't think that is a big part of the explanation for the opioid epidemic, which has been pretty indiscriminate in its victims. However, we are clearly doing something wrong. We are not investing sufficiently in our people, to put it broadly. If families are struggling, they don't need to be lectured to about takers vs. makers and have their food stamps and Medicaid taken away. They need educational opportunity, economic development, and health care.

That means doing the exact opposite of what  Republicans are trying to do. We need to tax the rich and invest the money in public education, free or at least affordable access to all levels of post-secondary education, renewable energy development, health care infrastructure and services, child care for working parents, family and medical leave, transportation infrastructure including mass transit -- all the stuff those other countries do where the people live longer, healthier and happier lives. All of this creates jobs. People can get jobs in education, health care, child care, transportation, renewable energy -- much better jobs than mining coal or bolting cars together all day, and those jobs are never coming back anyway.

The only way to make this happen is to never, ever vote for a Republican.

Agreed. Having lived and worked in other countries besides the US, I can say firsthand that socialistic approaches to the economy work great. Health care and social security are guaranteed. There's great maternity leave, and having up to six weeks of paid vacation each year doesn't suck!

The "talking points" about how Canadians (Brits, French people, insert nationality ______________ here) are bullshit. Go there, live there. People love having national health care. But ignorant twits who've never lived abroad can tell you all about what it's like and how terrible it is!

This country, the US, however, is founded on a genocide, to quote Art Spiegelman, and it continues to be administered by people who give not a flying fuck for human life or the stability of Earth's ecosystem. These people are called "capitalists," and capitalism's arch supporters are con men like Paul Ryan, who think Ayn Rand was really terrific. She wasn't. She was an ideologue and a hypocrite.

True! And her followers, many of whom aspire to atheism as well, hold her up as infallible ... i.e., a deity.

Are there graphs of US life expectancy with data subsets... demographics, education, etc. in the article?