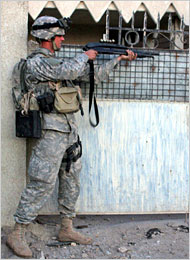 That's his own fault, to be sure, but only partially. In the first place, when our brave fighting man joined the army, he already had three misdemeanor convictions. In fact, he spent four days in jail just a few days before he enlisted. The army was happy to have him, even though he was a high school drop out, a drug abuser and a criminal. But that's okay, they gave him a "moral waiver."

The NYT quotes a spokesman for the Army Recruiting Command as explaining, "“A waiver is based on the actuality of the person, the totality of their life, the information we have on them — what have been their shortcomings, what have they done in their life to overcome a previous minor mistake." I'm not sure what Green had done in life to overcome his mistakes, but evidently it consisted of showing up and offering to enlist. And then he found Jesus. A few weeks after enlisting, he got himself baptized at Fort Benning. Jesus and the Army were making a man out of him.

A few days after the photo was taken, Green went to an army "combat stress team" and, according to Ryan Lenz of the AP, told them that he was thinking about killing people. Well, that was his job, actually, but he said more specifically that he was thinking about killing people he wasn't supposed to kill, i.e., he was having "homicidal ideation." The army shrinks are responsible healers, however, so they did something about it. They gave him a prescription for quetiapine, which is an anti-psychotic medication prescribed for schizophrenia and the manic stages of bipolar disorder. Then they sent him back out to do his job and kill people. Lenz writes:

— Three months passed without Army doctors and clinicians from the Combat Stress Team having any contact with Green. He was summoned for a second examination on March 20, 2006 — eight days after the killing of the family. Green was diagnosed as having an anti-social personality disorder and declared unfit for service. The process of discharging him began a week later and he was sent home.

— The Army's own investigation of Green's initial treatment, prompted by concerns he and others would use mental health problems as a defense in trial, is highly critical. Among the most salient findings from a July review of Green's treatment: "Although a safety assessment was conducted, there is no safety plan addressing how Soldier (Green) will keep from acting on his homicidal thoughts."

— Lt. Col. Elizabeth Bowler, a psychiatrist and Army reservist from California who took over the Combat Stress Team with Green's unit in January, recommended his discharge after the second examination in March. Yet she wrote a final evaluation that said Green exhibited no traits that would indicate dangerously erratic or homicidal moods, according to documents viewed by The AP.

It seems PFC Green was angry because Iraqis were killing his buddies. Indeed. That's what happens when you invade and occupy a country and impose a government on it. So ultimately, what's the difference between a political leader who sends young people abroad to kill people and bend the survivors to his will, and a homicidal maniac? At least they both found Jesus.
Posted by Cervantes at 10:13 AM