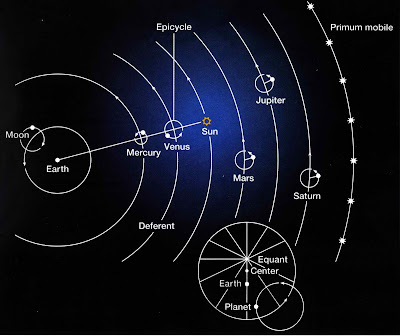 You are here. Whoops, no you aren't. We used to think so, but the earth is not at the center of the universe after all. Until Copernicus came along and published De revolutionibus orbium coelestium in 1543, astronomers had to reconcile their observations with a set of assumptions that happened to be false. As you can see, they had to add epicycles to the major rotations of the celestial spheres, put the center of rotation somewhere out in space rather than at the center of the earth, and in fact add more and more extra cycles and wobbles and froufrou that aren't even shown in the diagram. In addition to being bad at explaining and predicting, the Ptolemaic system was philosophically misleading. Once we understood that we aren't actually so special after all, our understanding of the very nature of existence began to change, and we experienced The Enlightenment.

Now let me make a personal statement because I tend to get some ad hominem responses about my personal qualifications whenever I say what I'm about to say. I have taken graduate economics courses at three different highly respected universities, and I had to pass qualifying examinations in economics for my Ph.D., which happens to be from Brandeis. So I know damn well how economics is taught and what is inside economics textbooks. This happens to be the same story that is generally accepted by reporters, pundits and politicians, and is bedrock in our political culture. Furthermore, classical conservatism, libertarianism, and neo-liberalism aren't just value systems: they are entirely unsustainable as coherent ideologies without faith in this self-same economic theory with which college freshmen are indoctrinated.

I say faith because economics is really more like theology than it is like science. The professor begins by enunciating a set of assumptions -- postulates, no different from assertions like "The Bible is literally true" or "God is omnipotent," for which no evidence is presented. From these assumptions, an elaborate theory is built which purports to describe reality. When, later on, it is impossible to avoid observing that the theory does not describe reality in one or another specific case, they call that a "market failure," which is supposed to be exceptional, and construct an epicycle.

This is not the procedure of science, which begins by observing reality and then searching for explanations of what is real. Scientific theories are built from data, not snatched out of the air. Scientists come up with new theories to explain new evidence -- e.g., the earth and planets go around the sun -- rather than trying to wrestle reality into conformity with their postulates, like theologians and economists.

Here are some of the assumptions underlying standard economic theory:

And a grand conclusion: “Free markets” are self-regulating and efficient.

There are more, all equally fallacious. It is not that there are exceptions to these postulates, or that they are a little bit wrong around the edges. They are always false, they have no relationship to reality. Any theory based on these assumptions is false, and the conclusion is not only false, but meaningless. One more thing: the false theory derived from these false assumptions does not, in fact, have anything to tell us about whether the outcomes from this fictitious free market are fair and just, but many economists and most politicians and pundits go from the supposed "is" -- that this fictitious "free market" is somehow the natural state of affairs or the way the world has been given to us by the creator -- to an "ought" -- that whatever outcomes it produces must be the right ones. This unmitigated nonsense lies at the very heart of our political discourse.

Next time, I will smash it all to rubble. As anyone can do.
Posted by Cervantes at 9:27 AM

It's all wrong what you're writing.

Papersmart helps students who have to cover lots of inforation due to their young age lack practical experience in making custom powerpoint presentations on any subject at their university or other establishment.