Why do you think they call it dope?

In the land of the bowler and bumbershoot, it is possible to have discussions that we can't have here. For example, a Parliamentary Committee has just published an inquiry on the classification of illegal drugs. If you have a high-speed Internet connection, a fast printer, and a really, really, serious interest in this issue you can download all 179 pages here.

If you are less obssessive, you can take my word for it. Here is the UK's present system of classification. 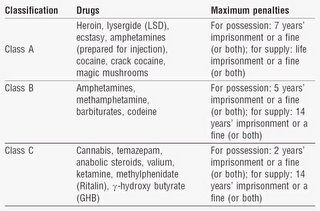 (In the U.S., penalties for most drug offenses are set by state law, so we don't exactly have a comparable system.) The committee notes that although this classification purports to be based on an overall assessment of the "harmfulness" of these drugs, in fact there are no consistent criteria or evidence base behind the classification system. They particularly note that there is no evidentiary basis for putting hallucinogenic mushrooms in Class A. They further note that it makes no sense for alcohol and tobacco to be omitted from the list, since they are in fact demonstrably more harmful than some substances which are on the list.

However, they are not calling for prohibition of alcohol and tobacco. On the contrary, they note that there is no particular evidence that the criminal penalties have a deterrent effect on the use of these drugs. They recommend uncoupling criminal penalties from the classification on the basis of harm. Although it is not the province of this report, a clear implication is that the entire question of criminal penalties for drug possession should be revisited.

Here is a key excerpt:

Decoupling penalties and the harm ranking would permit a more sophisticated and scientific approach to assessing harm, and the development of a scale which could be highly responsive to changes in the evidence base. It is beyond the scope of this inquiry to recommend an alternative approach to determining penalties but we note that possibilities could involve a greater emphasis on the link between misuse of the drug and criminal activity or make a clearer distinction between possession and supply. It should also be noted that while it is certainly possible—and desirable—to take a more evidence based approach to ranking drugs according to harm associated with their misuse . . . caution needs to be exercised in viewing the scale as ‘scientific’ when the evidence base available is so limited and, therefore, a significant part of the ranking comes down to judgement calls.

The caveats about the limitations of the evidence base notwithstanding, a more scientifically based scale of harm than the current system would undoubtedly be a valuable tool to inform policy making and education. Charles Clarke, the then Home
Secretary, pointed out that: “One of the biggest criticisms of the current classification system is that it does not illuminate debate and understanding among the young people who are affected by it”.

Lesley King-Lewis, Chief Executive of Action on Addiction, also called for “a much more rational debate” which would inform “young people in particular, of the different levels of drugs and the different and varying harms that they can do to themselves”. Sir Michael Rawlins, ACMD Chair, agreed, saying: “Where I think we are all at fault, not just the ACMD but all of us are at fault, is not being better at explaining to young people particularly the dangers of drugs”.

Professor Nutt, Chair of the ACMD Technical Committee, argued that a more scientifically based scale of harm would be of value in this situation: “in education the message has to be evidence based. If it is not evidence based, the people you are talking to say it is rubbish”. The Runciman report also noted that “The evidence that we have collected on public attitudes shows that the public sees the health-related dangers of drugs as much more of a deterrent to use than their illegality”, emphasising the importance of conveying health risks and harms as clearly and accurately as possible. It is vital that the Government’s approach to drugs education is evidence based. A more scientifically based scale of harm would have greater credibility than the current system where the placing of drugs in particular categories is ultimately a political decision.

Amen to that, and it all goes triple for the U.S., where our drug control policy is absolutely insane. The point of this post is just to introduce the idea that it is actually possible to have a rational discussion of this subject. Whether that will ever happen in the land of the puritan and the home of the moral crusader remains to be seen.
Posted by Cervantes at 1:58 PM