People often talk past each other because they are using the same words with different meanings, and they don't even know it. Words often have more than one meaning, and even a single dictionary definition generally has fuzzy boundaries. Furthermore, many words are laden with factual assumptions that the interlocutors -- the people who are trying to communicate with each other -- may not agree about, without even realizing it.

For example, what does "American" mean? In some contexts, it refers to the original inhabitants of the North and South American continents. It is more likely in current public discourse in the United States to refer to a citizen of the U.S., or perhaps any inhabitant of the U.S., or for some people a sub-set of U.S. citizens who are in one way or another considered to be "real" Americans. Of course the adjective does not only apply to humans, but to every other category of noun including values, norms, and beliefs, and people may have very different ideas about what those are. It can also be an adverb. When people are trying to communicate but using the word with different intended signification, they won't achieve mutual understanding.

So let's talk about race. All Homo sapiens, every one of us, are descended from people who walked out of Africa and into Asia about 80,000 years ago. They made it to Southeast Asia and Australia by about 45,000 years ago, to Europe around 40,000 years ago, and to the Americas only about 15,000 years ago, according to the linked article, although that's on the late end of estimates I am familiar with. In evolutionary terms, that's the blink of an eye. Populations in different parts of the world acquired some differences in the distribution of superficial characteristics where there was very strong selection pressure. Most obviously people who lived in hot sunny climates tended to have more melanin in their skin.

Of course people tended to interbreed with other people who lived close to them, but there weren't any strict boundaries, except for people who lived on remote islands or other geographically isolated places.  Gene frequency variance was much greater among people in any geographically defined group than it was between groups. Most geographic definitions would be essentially arbitrary of course, as people on the edges of the defined area would be interacting with people on the edges of adjacent areas. Once seafaring became possible, contact between southern Europeans and northern Africans became commonplace. As the Roman Empire at one time included parts of Europe, Asia and Africa people from all of those regions became Roman citizens and soldiers. The Roman Emperor Septimius Severus was born in what is today Libya. Here is a portrait of his son, the Emperor Caracalla: 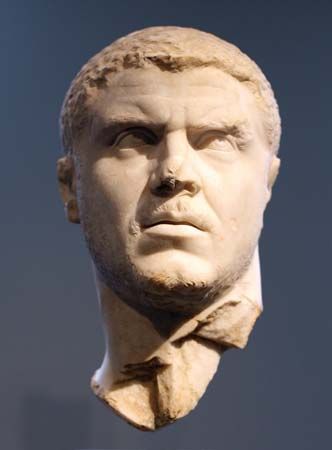 Caracalla was a murderous thug, but he did grant citizenship to all the free inhabitants of the empire. The concept of "race" as we understand it today arose in the context of European exploration and colonization of other parts of the world beginning in the 1400s. For reasons of geography and historical accident (see Jared Diamond, Guns, Germs and Steel, which probably should have been named Horses, Germs and Steel, but regardless) Europeans acquired the technology to conquer people in distant lands. They needed a justification for their conquests (something it never even occurred to the Romans was needed), so they came up with the idea that people were classifiable into a small number of races, of which Europeans were of course superior. The broad race categories the census asks about today are roughly similar to the classic categories, although lumping and splitting has of course varied.

So the idea of race is a social construct. That doesn't mean it isn't real in the sense that social facts are a kind of fact. It is a social fact, for example, that I am a college professor. That's a kind of thing that is real, but it has only existed in modern times, and could one day cease to exist. It requires that society produce it, and it takes its specific form in a given time and place. It was something else in France in 1850.

And then "scientists" who want to rationalize placing people into categories of "lesser" and "races" use a label like "eugenics" (George H. W. Bush's father was into it, as were the Nazis) to justify their crackpot ideas ... which are all derived from the same source as Shitler's: the desperate attempts of privileged Caucasian men to hold onto their wealthy lifestyles. You know, like colonialism!

I am sick of a world run for greed and power. When I stop to think that today--in 2019--we could feed EVERYBODY in the world, that we have enough food and water and it's all because of problems of war, power-seeking, greed, and the resultant distribution ... man. If we spent one-ten-thousandth of the energy that we do on weapons of destruction and seeking power, instead on feeding everybody, it would be a peace of cake.

We'll either all learn that we're one race, and learn to live together--like people already do in cosmopolitan cities in the world--or we'll perish.

Just re-read my comment. I love the Freudian slip--"peace" of cake.

How apropos! And what a beautiful thought. It could be peace, indeed. Do we have the will? We all share this planet. We come, we go. But it's still there. Do we give a damn about who comes after our infinitesimally short tenure? People like Shitler have a hole at the center of their souls that can never be filled, but that's what they do with their energy while they're here--try to fill their unfillable emptiness with sex, money, power, greed, and, in his case, hate.

The rest of us have to step up and say, "No more."

Whatever criticism you may have of his recommendations, Marx remains the foremost analyst of capitalism and class order. Race as we understand it today was invented to support a specific sort of rapine. If we succeed in eliminating it those fux will invent some other bs construct to divide labor against itself. The important thing is to remain vigilant against their propaganda.