The truth about the Michael Mann - Tim Ball lawsuit

As most readers know, Michael Mann is a climatologist and geophysicist who is best known for his reconstruction of global temperatures over the past thousand years, showing a sudden sharp increase following the industrial revolution. It's known as the hockey stick graph. Here is a recent version 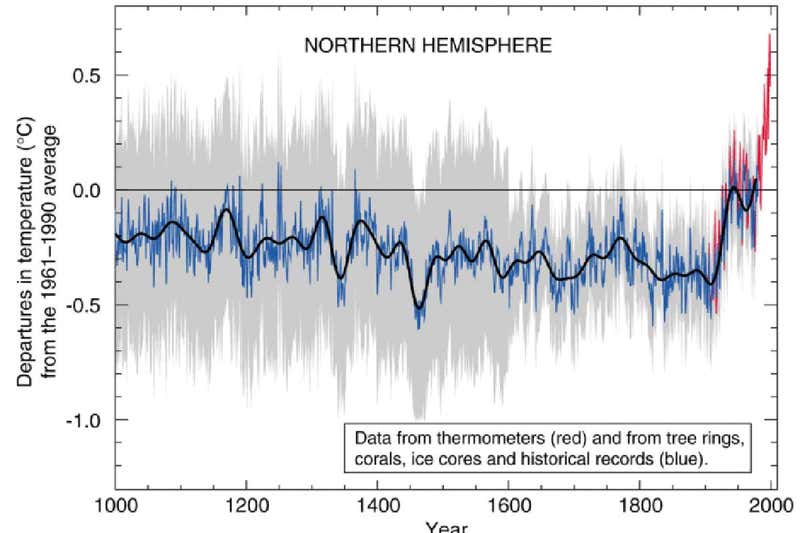 Climate change deniers have consistently attacked this research, but it has withstood every assault. This is a very long story but if you want to you can read all about it. Anyway, a Canadian named Tim Ball accused Mann of perpetrating a hoax so Mann sued him for defamation. Mann has already won a lawsuit against the Frontier Institute for publishing Ball's false accusations:

In a message posted to its website, the Frontier Center apologized for publishing “untrue and disparaging” comments about Mann. “Although the Frontier Center for Public Policy still does not see eye to eye with Mr. Mann on the subject of global warming and climate change, we now accept that it was wrong to publish allegations by others that Mr. Mann did not comply with ethical standards,” the think tank wrote in part.

Now a Canadian court has dismissed Mann's suit against Ball, and climate change deniers are crowing that this proves that the "hockey stick" is a hoax. They are also claiming that Mann "refused to produce his data." The truth is that Ball asked that the suit be dismissed because Ball is old and sick, and also because nobody believed him anyway.

In reality, the court tossed the case in what appears to be an act of pity for Tim Ball. As a statement from Mann’s lawyer explained, Ball’s request to terminate the lawsuit “relied heavily on his alleged state of health” and because, per Ball’s defense team, his claims are “given no credibility by the average, reasonable reader.” (An assessment bolstered by the fact that in a similar suit, a judge ruled that “a reasonably thoughtful and informed person… is unlikely to place any stock in Dr. Ball’s views.”)
On the health front, the plea to toss the case notes that Ball, born in 1938, “suffered coronary heart failure” in 2017, after “quintuple bypass surgery” ten years prior, in addition to having Type 2 Diabetes. Apparently being old is a defense?
Ball’s attorney also added that his website doesn’t show up in at least 92% of searches for Dr. Mann, and that it has “low popularity.”


The court never asked Mann to produce his data, which is and always has been publicly available. If you want to analyze it yourself, it's here.

Here's an interview in which Mann discusses the late David Koch. It will reward your time. Unfortunately the denialists have been lying about this case and the judge's actual ruling, and at least one person who reads this blog was taken in by them.

also, too .. . Most civil suits are settled. If you sue someone for defamation and they end up retracting and apologizing, you have won. Also, in the case of Ball, the judge did not  order Mann to pay Ball's legal fees, or even one penny of them. That is also a lie by the denialists.

and also . . . The methodology, including both a text description and the actual analytic code, are posted at Mann's web site.   They are all publicly available, and you can read the methodolgy statement yourself, if you are sufficiently literate.  Mann did not withhold anything from the court and he is not hiding anything. Everybody in the world is free to examine everything he has done, to try to replicate it or show that it is invalid. So stop fucking lying!

plus which .. . Several independent teams of investigators have used the publicly available data and analytic code to test Mann's analyses and conclusions and they have concluded that he was essentially correct and others have actually extended the paleoclimate reconstruction farther into the past. Here is an extensive bibliography. It is utterly inane even to be discussing this. It is not controversial. It is the truth, like it or not.

"Also, in the case of Ball, the judge did not order Mann to pay Ball's legal fees, or even one penny of them. That is also a lie by the denialists."

I'm curious why you say that.

In the Supreme Court of British Columbia:

THE COURT: "This is a relatively straightforward defamation action and should have been resolved long before now. That it has not been resolved is because the plaintiff (Mann) has not given it the priority that he should have. In the circumstances, justice requires that the action be dismissed and, accordingly, I do hereby dismiss the action for delay."

THE COURT: Those are my reasons, counsel. Costs?

MR. SCHERR (Ball's attorney): I would, of course, ask for costs for the defendant (Ball), given the dismissal of the action.

MR. MCCONCHIE (Mann's attorney): Costs follow the event. I have no quarrel with that.

THE COURT: All right. I agree. The costs will follow the event, so the defendant (Ball) will have his costs of the application and also the costs of the action, since the action is dismissed.

I say it because it is true. The order is to pay court costs, not Ball's legal fees. Learn to read.

I, too, was confused by the granting of the request for costs. Not being a lawyer, the meaning of the language of the court was unclear.

Any idea how much money is involved?